It's not as bad as it seems. Trust us.

A guy named Ben Akselrod is running for the assembly in the Sheepshead Bay neighborhood of Brooklyn, NY. His campaign sent out mailers that blamed an increase in crime on the policies of his opponent. But check out the highlighted phrase in the mailer: 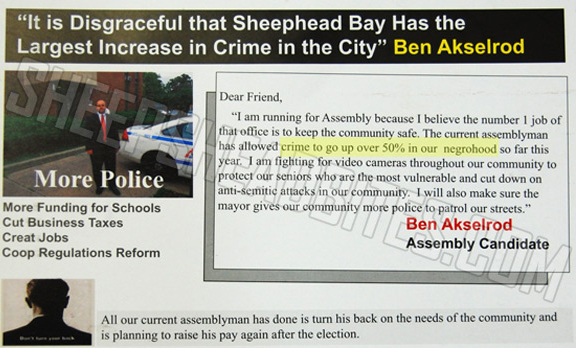 If you can’t read it, the phrase says the opponent “has allowed crime to go up over 50% in our negrohood.” Yow.

Not to worry! Akselrod says it was just an unfortunate typo. He responded thusly:

“As the candidate, I take full responsibility for this inadvertent error and I am sorry to anyone who was offended by it.”

That’s some inadvertent error, all right. You really have to go out of your way to misspell “neighborhood” as “negrohood.” Most typos aren’t quite so . . . different from the original word.

But even if we give Akselrod’s campaign the benefit of the doubt and assume that the word truly was an unintentional typo rather than a Freudian slip, the mailer still makes him look pretty bad. It contains several other spelling and grammatical errors. For example, we learn of Akselrod’s desire to “Creat” jobs and the fact that he misspelled the very name of the district he wants to represent! Heck, even his name seems like a typo—I mean, is it just me, or do you want to mark up your monitor to change the spelling to “Axelrod”? Clearly, the text wasn’t even run through a spellchecker, much less proofed by human eyes.

Regular readers of GRAMMARGEDDON! will remember that we recently saw another creative misspelling of “neighborhood” on a Boston public school sign. Maybe there’s something in the water on the east coast.

(The photo comes from this article, which provides more details on this incident. I’ll be interested to see how it affects Akselrod’s prospects for election.)

Hi, folks! I haven’t been too present on the blog lately. I was away for much of last week on a family vacation, and tomorrow I’m heading to GenCon to see old friends, but I recently found* two typos that I had to share. Consider them snacks to tide you over until a real post comes along.

First, you’ve heard of Porsche, right? Their cars ain’t cheap, so you’d figure the company would have a little money to invest in producing great ads. However, they seem to have skimped on the proofreading in this series of billboards promoting their Boxster. I always say if you’re going to misspell the name of your own product, you might as well do it big.

Next up is this obituary, which contains a hilariously inappropriate acronym in the photo caption. Apparently, some folks on Twitter have called this the “worst caption fail of all time.” I really don’t know how this particular error can be explained. You’d have to go out of your way to make this mistake. One theory is that the caption writer meant to signify “lots of love,” but that just makes me LOL.

(When I say I “found” these typos, I mean I read about them online. One of them was sent to me by a friend, and one of them was discovered while browsing. I much prefer taking photos of real typos in the wild, but until Karen and I launch a Kickstarter campaign to fund our world travels for that very purpose, a prescriptive grammarian’s gotta do what a prescriptive grammarian’s gotta do.)

What with the Olympic Games playing out across the pond, lots of people are hungry for up-to-the-minute news about the events and athletes, so they head straight for the official website—or they try to, at least. But if they make any mistakes while typing in the URL, they might end up on a fake page instead, where spammers are happy to offer many wonderful ads for their clicking pleasure.

Last week Zscaler, a cloud security company*, reported that 80% of all Internet domain names that contain the string “olympics” are actually scams or spam, and many of these domains are incidents of typo squatting. That’s when a spammer registers a website with a URL that is extremely similar to the real one but with deliberate misspellings designed to catch careless typists. Zscaler’s sample list includes the following fake sites, which I advise you not to visit:

msnolympics.com (msn instead of nbc)

nbcolympics.org (.org instead of .com)

mbcolympics.com (m instead of n in nbc)

ncbolympics.com (c and b inverted in nbc)

Of course, the fact that some websites are scams isn’t exactly news to anyone who’s spend more than, oh, five minutes on the Internet. But given that the Games are such a hot topic at the moment, I couldn’t pass up this opportunity to tie them to the need for better proofreading. By typing carelessly, you could be putting money in the pocket of a scam artist. So do the right thing and mind your URLs.

* That’s how Zscaler describes itself on the company website. I know the slogan refers to cloud computing, but I prefer to think that they sell trained attack clouds that will guard your home. I’d buy one of those, wouldn’t you?

Regular readers of this blog might remember a magazine ad I ran that contained a gotta-see-it-to-believe-it typo. Well, I recently found myself forced to flip through the Crate & Barrel summer catalog (since it was the only reading material available near the, er, place where I was sitting), and the very first page that I happened to look at contained the same typo, albeit in a smaller font. 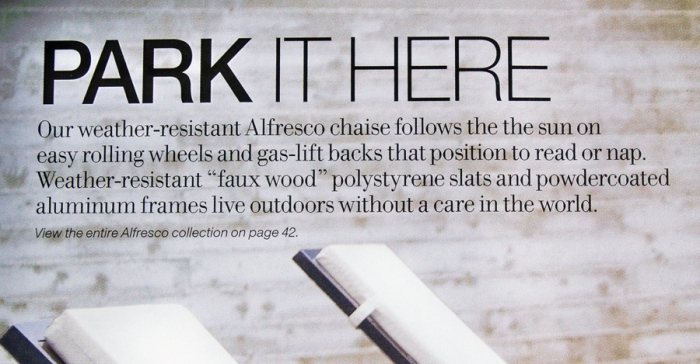 Just like in the other magazine ad, the people responsible for this error can’t fall back on the excuse that it’s easy to miss a repeated word that occurs at the end of one line and the beginning of the next line (which is true, by the way). And most spellcheckers catch repeated words, so apparently this copy wasn’t subjected to even that lowly level of care.

For the record, I’d also hyphenate “powder-coated” (as they did, correctly, with “Weather-resistant”). However, the trend these days is to close up compounds, so I won’t hold it against them. I mean, yeah, I think they’re wrong in this case, but their hearts were in the right place. And at least they didn’t have “powder coated” as two separate words.

So now I’ve found two recent instances of “the the” in print. Is this the beginning of a series? Stay tuned to find out!

Should weekly grocery-store ads count as low-hanging fruit and thus be excluded from the wrath of GRAMMARGEDDON!? (Hmm . . . note to self: don’t end a question with the name of the blog again.)

Well, here’s one, anyway, sent in by my old college pal Kevin, who apparently received the ad in his email. It’s from the H-E-B chain of grocery stores in Texas, which I had not heard of before. Can you spot the typo in the ad? I’d so it to you, but that would cheat you out of the fun of finding it yourself. Okay, okay, there are at least two things wrong in the ad, but I’m talking about the most obvious error.

Is this too nitpicky of us? I don’t think so. It’s just another example of a blatant typo that really should have been caught—and it probably would have been, if it weren’t for those meddling kids! Er, I mean, if anyone at H-E-B had spent 10 seconds reading over the ad. But they probably just ran a spellcheck and called it a day.

This lowly typo reinforces one of our blog’s main points: if you can’t be bothered to check your work for errors and present a professional front when communicating, you can’t expect people to treat you professionally.

The trailer for the new Baz Luhrmann film of The Great Gatsby includes a big typo—literally, a big one.

Of course, these days, any suspect sign might have been Photoshopped for laughs, but not in this case. The movie’s official trailer shows the typo, big as life, about 13 seconds in, and again at the 1:41 mark.

If they don’t fix the mistake before the film’s release this Christmas, they can always say the sign is a clue that the movie takes place in an alternate universe, like they did with “Manhatan” on the TV show Fringe.

You’ve probably heard about how easy it is to miss a repeated word when it appears at the end of a line and the beginning of the next line. For example:

“Wow,” he said. “I had no idea how easy it is to miss a word when it appears at the
the end of a line and also at the beginning of the next line!”

When you’re reading quickly, your mind just absorbs the repetition as a way of maintaining the continuity of what you’re reading.

I’d like to think that’s what happened with the ad shown below, which ran on the back cover of a magazine. (I blurred out the name of the race.) This might just be the most egregious editing mistake I’ve ever seen make it to print. And since I’ve been in the editing biz for a long time, that’s really saying something.

Got any better—uh, I mean, worse examples? Send ’em in to the blog.