Grammar's not the end of the world.

Here is the daily comic panel for October 11, 2013. I took a screenshot in case it’s revised and replaced anytime soon. 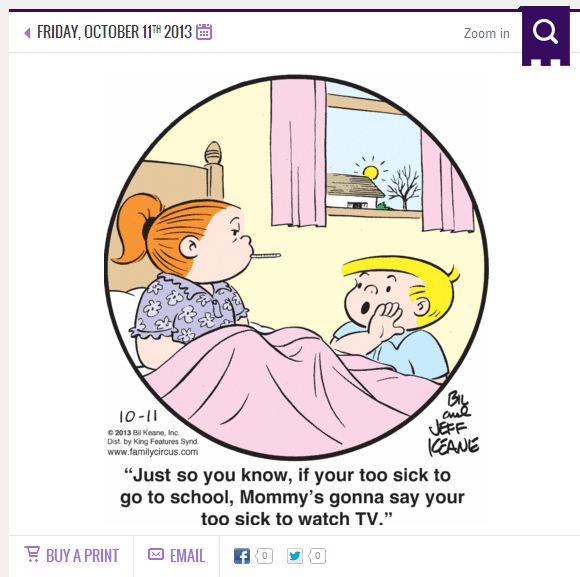 Do I need to point out the error (which appears twice)?

This comic was written, drawn, colored, lettered, checked (maybe?), and distributed. King Features Syndicate says that The Family Circus is one of the most widely syndicated comic panels in the world, appearing in more than 1,500 newspapers every day. You’d think there’d be a little quality control somewhere in that chain. Then again, this is The Family Circus, so maybe no one read it.

More ways to improve your enjoyment of this comic:

The original comic appeared here. By the time you click the link, maybe they’ll have fixed the errors. Then again, this is The Family Circus, so . . . well, you know.

Coincidence is a funny thing. The last typo shaming I posted here on the blog was about a big sign at a football stadium that misspelled that notoriously hard-to-master word, “welcome.”

Just a day later, a friend alerted me to another football-related typo. At first I didn’t believe her; the mistake seemed too ridiculous. I thought she’d fallen for Photoshoppery. But alas, it’s true.

The Notre Dame Fighting Irish played a home game against the Temple Owls. As a treat for fans, Notre Dame made a souvenir soda cup with the team’s nickname emblazoned around the top.

Only someone transposed two letters, turning the team into the Fig Thing Irish. 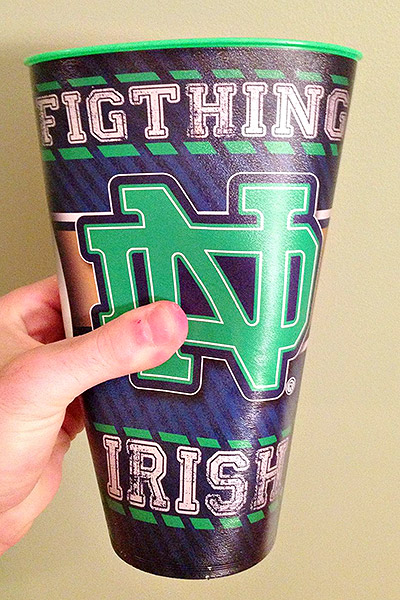 Dennis Brown, spokesman for the university, said they weren’t going to blame anyone, and the cups would be fixed before the next home game.

I say leave them as is. Who wouldn’t want to watch the Fig Things take the field?

Last week (on September 9), the Houston Texans and the San Diego Chargers fought it out on Monday Night Football. The Texans were down for much of the game until they rallied to score a whole bunch of points* for a late comeback victory.

I’d like to think they were inspired by the sign that hung in Qualcomm Stadium, welcoming them to San Diego. 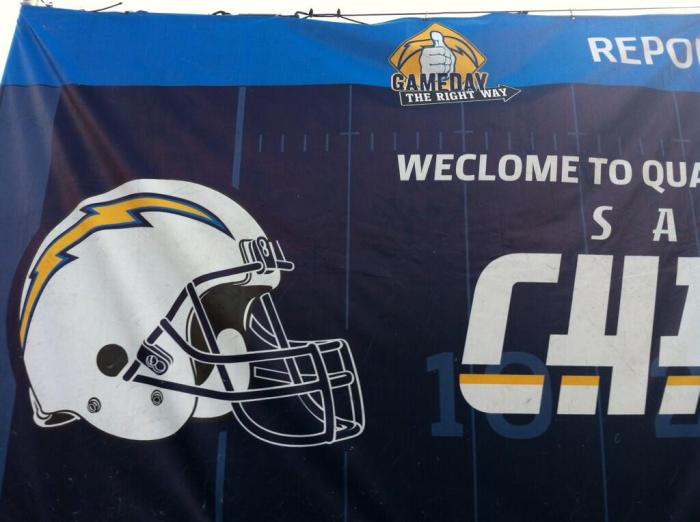 I mean, there’s just no way the Texans could let the bad spellers win. (Photo from here.)

If you’re going to make a mistake, make it a really big one that gets shown on TV and spread around the web, I always say.

* Yes, this is the technical term for it. Shut up.

“Moments Fade, But Memories Stay.” That’s the motto on the cover of the 2013 yearbook for Moorhead (Minnesota) High School.

True enough. In fact, students this year will have a special kind of memory. 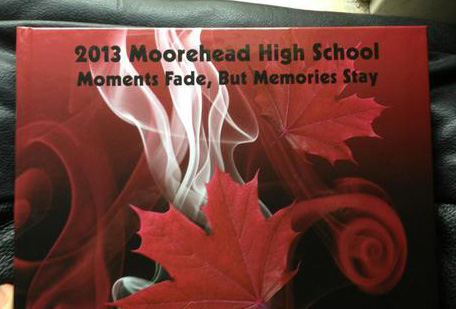 The name of their school is misspelled on the cover of the yearbook. The cover says “Moorehead High School.” And Moorhead also happens to be the name of the town, so you’d think it would be the kind of word that’d be hard to get wrong.

Supposedly, the cover was checked by an adviser and several classes of students who worked on the yearbook. (A spokeswoman for the school district said they aren’t granting interviews with the unnamed adviser. I’d go into hiding, too.)

The district doesn’t have the money to reprint the yearbooks. Instead, they’re talking about putting a sticker over the error.

I like this quote from Moorhead junior Zach Ahrends: “[It’s] kind of sad they can’t spell our city’s name right.”

At least it will give the students something to write about in each other’s yearbooks when they get tired of 2 COOL 2 BE 4 GOTTEN.

(Thanks to this site for reporting on the story. That’s where the above photo comes from.)

There sure seem to be plenty of typos in the news lately. (Probably the Mayans again.)

First, a man in Washington state used his tractor to plow a marriage proposal into a field. The letters were 150 yards tall. He flew his girlfriend, Jody, up in a plane so she could see the popped question from above. Unfortunately, his tractor didn’t have a spellcheck—he had plowed the first letter of her name backward.

(The photo comes from this site; I added the arrow.)

Next, we have another entry in the Worst Possible Way to Misspell “Public” Sweepstakes. This one also comes from Washington state. (Something in the water?) The Washington Charter School Resource Center placed a newspaper ad to spotlight an upcoming conference. Neither the center nor the newspaper noticed that a crucial “L” was missing from the word “public.” 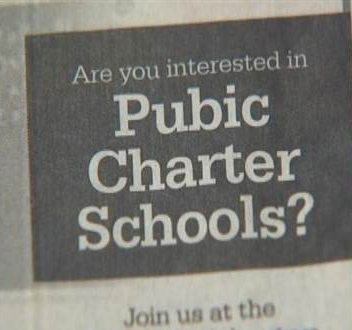 (The photo comes from this site. Interestingly, the story there links to a similar mishap that happened in May 2012, when the University of Texas handed out commencement programs to families of students graduating from the Lyndon B. Johnson School of Public Affairs. Yeah—you know what happened.)

Longtime readers of this blog might remember a banner displayed at a football game that asked sponsors to “become a partner in pubic education.”

And finally, the Toronto Sun newspaper recently ran a correction notice to fix an error about whether teachers had been paid during a work stoppage. Unfortunately, they now need to run a correction about the correction.

(The photo comes from this site; I added the arrow.)

Is there a lesson to learn here? Maybe it’s just that no matter how bad your typo is, at least it’s not plowed into the ground 150 yards tall. Probably. I can’t vouch for all of you.

Some mistakes are harder to erase than others. In Oklahoma, state representative Mike Ritze sponsored a bill (and donated money) to install a granite monument of the Ten Commandments on the grounds of the state capitol building. The monument is 6 feet tall and 3 feet wide, and it weighs 2,000 pounds.

One potential problem is that it might invite a lawsuit from the American Civil Liberties Union because the monument violates the separation of church and state. But perhaps of more immediate concern is the fact that the granite contains a few spelling errors.

The Fourth Commandment mistakenly says, “Remember the Sabbeth day, to keep it holy.” (The correct spelling is Sabbath.)

The Tenth Commandment says, “Thou shalt not covet thy neighbor’s wife, nor his manservant, nor his maidseruant . . .” That final word, of course, should be maidservant. (Or perhaps this is actually a clever way to get around the rule. “Hey, God’s totally cool with me coveting my neighbor’s maidservant! It’s just the maidseruants I’ve gotta stay away from.”) 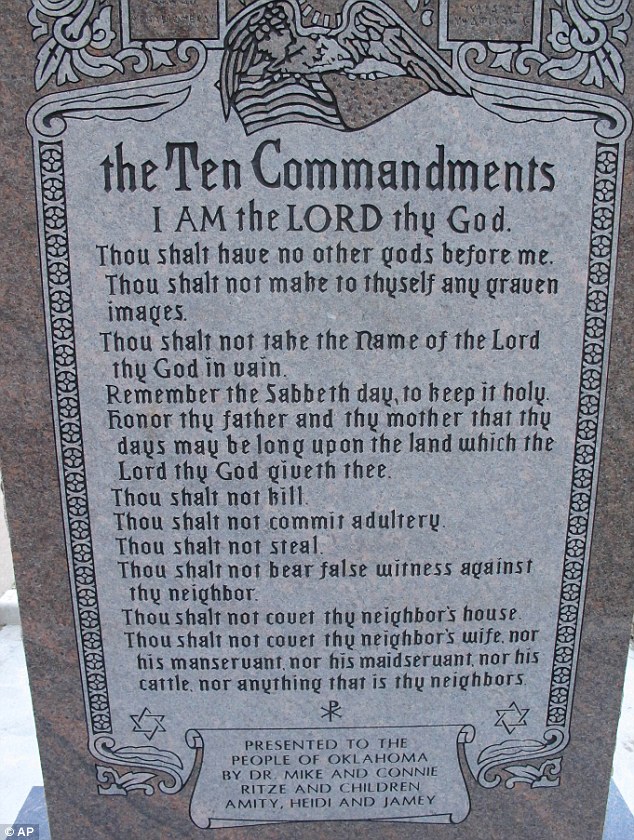 Ritze plans to have the misspellings corrected. No word on whether he’s adding another commandment that says, “Thou shalt not skip the spellcheck.”

The photo comes from this site.

Here’s a fantastic collection of photos showing some astounding that’s-gotta-be-Photoshopped typos on professional sports jerseys. The misspelled player names are fun, but the real wowsers are the team name screw-ups, like the San Francicso Giants (#9), the Kentcuky Wildcats (#11), the Cncinnati Reds (#23), and many more. My favorite might be the way “Navy” is misspelled on the jersey in the inset on photo #20: 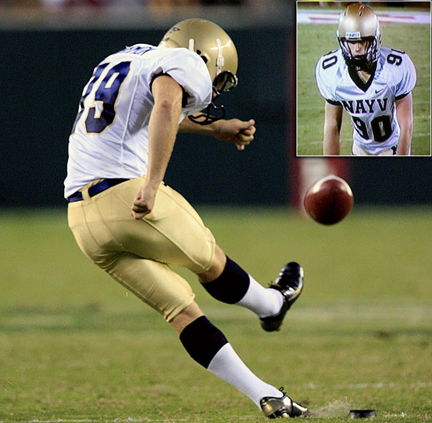 (In fairness, that might pass as a phonetic spelling of the team name.)

No insightful commentary from me. Just go enjoy the gallery. And be glad that your typos aren’t usually displayed for all the world to see (and photograph).

(Thanks to Kevin P. for alerting me to this amazing gallery!)

Lately I’ve been posting pictures of signs that feature typos. Here’s one that suffers from a different kind of problem. It meant to say one thing but ended up saying another. 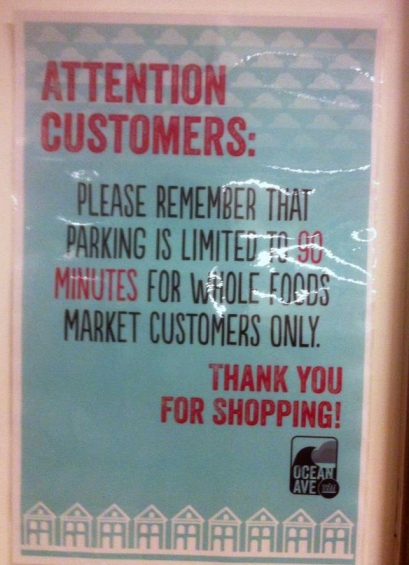 So if parking is limited to 90 minutes for Whole Foods Market customers only, does that mean people who are shopping in a different store can park in the lot for as long as they want? Can the guy who lives down the block leave his car in the lot all the time? I guess Whole Foods Market customers are the only ones getting the shaft here. Doesn’t seem like the best way to treat the people spending money in your store!

They could have avoided the problem by adding a few more words to the sign. Something like: “. . . parking is limited to 90 minutes and is for Whole Foods Market customers only.” It’s usually worth giving a little extra attention to ensure that your message is being conveyed accurately, especially when it’s displayed in public.

(The above photo was kindly donated to the blog by Josh Weinberg. Thanks, Josh!)

The Red Lion Area school district in Pennsylvania tried to drum up some sponsors by creating a snazzy banner to display at football games. I imagine the idea was “Hey, once local businesses see how cool our banner looks, they’ll want to become sponsors and get their names up on the next banner!”

But their banner had a wee bit of a typo.

Don Dimoff, the marketing and communications manager for the district, said:

The school district has apologized for what they described as an “unfortunate error.”

Cheer up, Red Lion folks! Maybe the banner will attract some sponsors after all—though maybe not the kind you were expecting.

“Okay, okay,” you say. “Pointing out typos and other copy editing failures is fun and all, but does any of this stuff really matter?”

Well, how about this? In Albuquerque, New Mexico, officials recently wrote up a proposal to increase the minimum wage and change how employees receive tips, hoping to get it on the November ballot. More than 12,000 people signed it, and the proposal seemed on its way to a slam-dunk victory, before someone noticed an error in a key section. Here’s the troublesome passage:

The measure would also require that starting in 2013, employers of tipped employees like waitresses and waiters be paid at least 45 percent of the minimum wage in cash wages from their employers.

See the problem? According to the wording above, who will be receiving the wages here? That’s right—the employers. Obviously, it should be the employees who will benefit from the change in minimum wage and tips, not their bosses. But that’s not what the proposal says. Councilor Ken Sanchez, one of the sponsors, said that if the proposal passes as is, lawsuits will probably be filed against the city.

As you might imagine, changing the wording of a government proposal after it’s been voted on involves just a bit of bureaucracy. Albuquerque city councilors are thinking about letting the current proposal appear on the ballot and also putting up another version with corrected wording. (Sure—that won’t be confusing to voters.)

Whatever happens, this is a good lesson in clear writing, good copy editing, and/or careful proofreading—take your pick.

(Here’s the source of this story.)